Finally I’ve decided to end the fraudulent university lifestyle that I’ve perceived for nearly a year now but I really started joining the game of it a few months ago, a lot of people I’ve spoken to ready decided within themselves that I went to university honestly I never knew where people came up with that, so random honestly, sometimes I’d get random messages of being in certain locations Leicester came up a lot along with Coventry and Bedfordshire, I’ve been to Coventry once, Leicester never been there and Bedfordshire once also Hull, it really got to a point where I thought ‘fuck it, if that’s what you want to think let me play along as well’ What’s the university I decided to perceive? Of course, it was Leicester I came up with a made up course called ‘Bodycount Management’ along with a real course called ‘Computer Science’ Let me tell you now a lot of you lot believed it, but how? I’ve never posted me going to lectures or me being in a library, it’s the tweets and snapchats that got a lot of people and for a while I’d think I’m actually a student got myself back onto UNIDAYS, but this whole time I’d be working and living in a town and city! Life has been great!

University, the good, bad and damn right stressful…but what do I know I’m just an outsider right?

I did a poll on this blog to receive answers but silly old me didn’t screenshot in time and the replies got lost in my mentions, I tried for a good day to scroll through my mentions but they stopped at a certain point, so I’m going to do this blog in a different way!

If you don’t know me from the TL, every time I do a blog I do a poll to go with it, it’s so I can interact with people and find out their views and opinions, a lot of the views I get are extremely interesting.

I always start of my polls with the first question being ‘where is everyone from?’ And do 4 options for the vote and do ‘Quote tweet others’ so people can pinpoint exactly where they’re from.

Okay, let’s get into it then!

I stated the 4 universities in a poll, that I generally hear about most and where a lot of the people I know attend & also where most of the fuckery happens NN2 (Northampton) you’re also up there with these 4, I’ll never forget about you lot.

The one thing I’ve noticed with a majority people living in halls, some of you live like actual tramps, and you bring that same wayward dirty behaviour to when you move into a house with your mates! Do you not have any shame? I’ve been to university accommodation *Brunel University* to be exact and the communal kitchen was filthy like it would be a rodents best friend to live in.

The mindset some of you have to live in your own dirt, yuck!

ACS should be called ‘AS’ because really no Caribbean people are involved that much, correct me if I’m wrong but it has more Africans, even  ACS is very dumb, that one debate on the twitter TL where a white girl decided to run for ACS president, it was actually the most ridiculous thing I’ve ever heard, how and why would you want to get involved in something that has nothing to do with your race.

This one gets to me a lot, for someone that doesn’t go to university this is my pet hate, I know there are fire drills for testing I understand that but some of you wayward people can’t cook and are setting off the alarm for burning common toast, not being funny but how do you burn toast? How can you forget about your pizza in the oven? How can you burn rice? Oh yeah, you’re not a serious weed smoker if you don’t know how to put a sock over your smoke alarm if you can’t do it successfully go and sit next to a window and smoke or better yet, get the hell up and stand outside.

Personally, I feel 9k for a university is a bit of a stretch, I feel it should be free but with Theresa May in charge and the current state of the UK, I feel we’ll never get that. The fact your university fees cover lectures, where you are practically reading from a powerpoint which is probably 20 years old, used over and over again per year is ridiculous, paying for ‘contact hours’ where you can reach your lecturer is rather bizarre, you’re practically paying for a university library absolute nonsense, deep this you’re paying for student services, the same student services that love to sweep issues under the carpet. 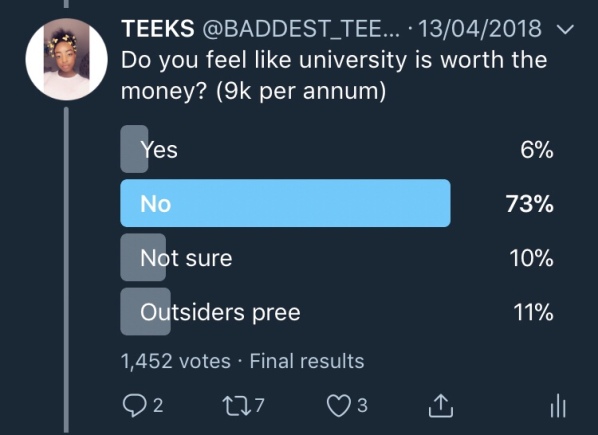 I really needed to ask this question as when I’m on Twitter mostly I always see complaints on group work, back in school I was one of the people that will let one person do the work while I sit back and relax, but in university, I’m guessing it’s highly frustrating and from the votes it proves a high majority of you don’t like it, you 2% that said yes, you must be lying, you other 30% you are definitely the ones who sit back and do nothing.

The outcome of this vote left me so surprised, all I hear people rattle on about is Lidl or Aldi, the fact that Tesco came out on top is laughable, the same Tesco that sold horse meat that is where you want to go and fill your baskets. To be fair I shop everywhere but mostly Costco, however, I prefer Aldi & Lidl as they’re so cheap as a student I’m guessing you wouldn’t want to spend £50+ on food as things can go off very quickly as none of what we buy is even natural produce anymore. Fruit and Vegetables are twice their sizes always being injected with some sort of formula so they’re more than likely to go off twice as quick.

The statistics to this one didn’t really surprise me, I’ve had friends where the family would have input in the course they choose, which I will never understand because at the end of the day they can put all the input they like in, but who is completing the course it will be YOU! You will be studying, dealing with the stress, graduating and of course going into the particular field, why would you let your parents choose a course for you which they will not be participating in? Sorry but I wouldn’t attend let alone apply for the university if my parents would’ve picked a course, for example, if my father picked my course I’d be doing ‘Music Management’ or anything to do with music, my mum, on the other hand, I can’t even give an example, because she certainly wouldn’t tell me, as far as I’m concerned I’d turn off, Imagine going to university between 3-6 years on a decision that isn’t yours, no thanks!

Wasn’t surprised at this result at all, I don’t even go university but I get stressed by keeping up the persona that I attend, besides from that I couldn’t imagine what you university students must go through, the revision, assignments and most importantly the exams (If you have any) but a lot of you end up doing so well coming out with 2:1 or even better 1st’s.

“Your positive action, combined with positive thinking results in success”

Surprise Surprise! Honestly, there was no surprise here because the result I wanted to win did, whenever I check snap stories I always see ‘fUcK lEcTuReS’ or ‘fUcK 9ams’ Sometimes I don’t understand lectures that much, you’re literally sat down for hours looking at a powerpoint from 1956 with a tutor doing up voiceover. 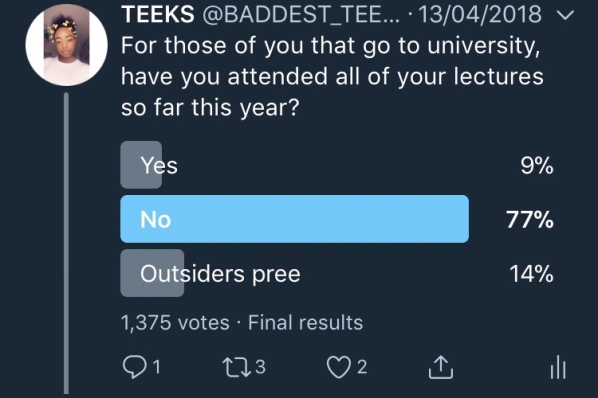 First of all, if you’re between 20/30% how are you still a student because I swear you can get kicked off your course for low attendance? Anyways what’s my own 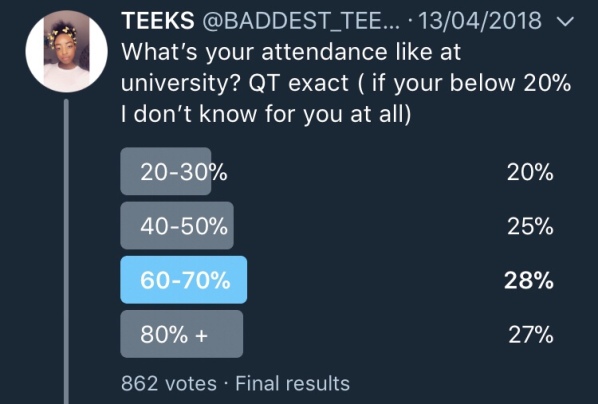 Whoever said ‘everyday’ someone has to be lying because I want to know what club is open every day for raves, who even has the time to do up ‘move your waistline’ every day of the week, 1/2 sounds more reasonable. 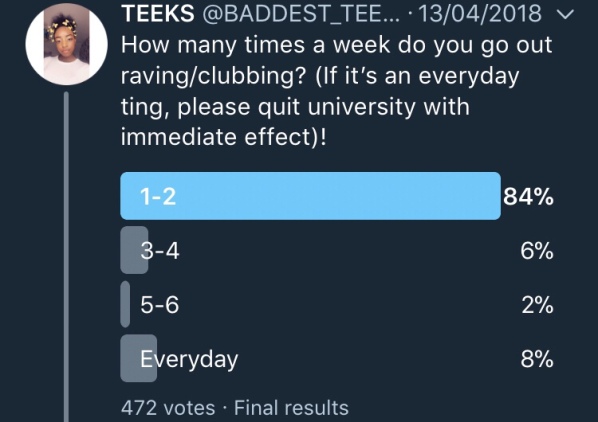 The end is near, well from this blog, this topic was meant to be 100 times better than what I’ve just written but sometimes work with the resources and content you have, I received some interesting replies from this and if I ever find them again (Very much doubt it) I shall add them in.

For those of you who attend university, please continue to prosper and persevere, if you’ve just started the end seems so far away yet once the first year finishes you really don’t have a lot of time left unless you plan to stay there for 4 years +, honestly the saying ‘time flies’ I never believed it till I reached 20. If you’ve made a solid friendship group they’ll always be around, but assignments and exams are vital for you to get where you want, and of course sleep and food use your student finance money wisely, I see they don’t dish out money easily in this England, I believe that everyone that goes to university can and will be successful in life if they focus on what they want!

For those of you who are planning to go university, continue to work hard, work for your grades, nothing in life comes easy and a university will only get harder but the results you’ll see at the end will amaze you, hopefully, this blog can be a small learning curve for you.

I’ve had to add my dry banter into this since I lost everything and I had no energy nor time to do another question thread part 2.

Over half a million people a year make the transition to student life, for some students, it could be exciting but others it can also be incredibly daunting, universities say they have a lot of student support in place but I think that can and should be strengthened with more mental health services and wellbeing programs installed within the university, half a million people spread out between the UK can you imagine how many people can be affected from previous issues and new ones, I don’t think enough help is given. With higher study costs and career markets getting extremely competitive there is a whole lot of pressure. An annual student report from September 2017 showed that 87% of students struggled with social or academic aspects while at university, other issues that were highlighted was isolation, balancing work, financial difficulties and living independently.

Personally, I think a lot more services should be available on campus, living on campus their should be people to call at any time of the day.

This is where I come in, I’m not student support I’m really just Teeks, but I’m available a fair amount of my day despite me working, but any problems and you feel like you want someone to talk to (text only) I’ll try my best to help (07925672594)

*Disclaimer* This isn’t my main number, any abuse I will straight block your number

Okay now let me wrap this up, this university experience has been immense been at work or in my house for the past year and a half, thank you to all the fakes that said they’ve seen me in Luton or Leicester I did not appreciate that at all! Bodycount management is a fantastic course, highly recommend it, it’s only available at DMU (Obviously) This university persona has been fun but I think I’m finished with it now.

This site uses Akismet to reduce spam. Learn how your comment data is processed.